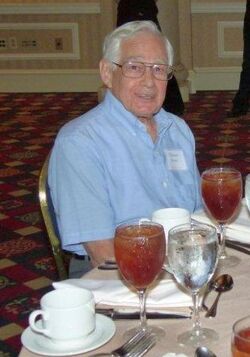 A wonderful, humble, charismatic and courageous man, Damian Sclafani passed away on 6/30/2019 at the age of 95 years young. Born, July 12, 1923 in Brooklyn, NY to Luigi Sclafani of Shaka, Sicily and Calogera DeMino of Sicily. He dearly cherished his mother, father, four sisters and four brothers. Damian was the third child born to Luigi and Calogera of their nine children. In his earlier
years, he grew up as a young boy in Brooklyn. He worked hard and helped bring money to his family as did his other brothers and sisters.
Damian left Brooklyn to join the United States Air Force from 1942-1945. While in the Air Force he excelled in aviation mechanics and engineering. He received specialized education and certification in his field. He attended specialized education in the study of the airplane and jet fuselage. Damian advanced his career becoming a certified flight engineer first working on commercial flight planes.
During this phase of his career, he received several Citations of Professional
Excellence. Damian discovered problems with commercial and corporate jets that
if not discovered would have resulted in devastating flight failure of these
aircraft.
He traveled to many corners of the globe, meticulously inspecting the aircraft
they was carrying corporate executives, board members and presidents of the
companies that he served. He continued traveling professionally throughout his
amazing career until he retired from Dupont Corporation in Delaware.
His loving wife, Sylvia Sclafani passed on Christmas Day, 1997. Together they
shared a wonderful, loving marriage. Aunt Sylvia passed after 8 years of being
very ill. Damian took care of her daily throughout these difficult years until she
passed on.
Sylvia and Damian were a loving, supportive aunt and uncle to numerous nieces
and nephews. They did not have children of their own; Uncle Dan became known
as everyone’s second father.
He is survived by his brother, Anthony Sclafani of Stormville, New York, his
sister Catherine Calvo of Fishkill, New York and numerous nieces and nephews.
He is also survived by a special friend, Connie Stanton.
He is predeceased by his father Luigi Sclafani, his mother Calogera Sclafani, his
brother Dominic Sclafani, his sister Mary Lupo, his sister Margaret Malizioso,
his sister Beatrice Deangelis, his brother Frank Sclafani and his brother Stephen
Sclafani plus several nieces and nephews.
Through his generosity of spirit and life experience, Dan enriched and continues
to enrich the lives of everyone he touched, mostly his brothers, sisters, nieces,
nephews and friends. Family was second to none to Uncle Dan as his immediate
family would attest to. Damian believed that family makes all the difference.
During his retirement, Dan enjoyed being part of the Lower Valley community in
Newark, Delaware. He was a member of his beloved Senior Center Computer
Club and frequented Dupont Country Club for many years while living there.
He remained an encouragement to all of their lives and will remain in their minds
and hearts forever.
We love you, Dear Brother, Dear Uncle and Dear Friend; Damian Sclafani.