Meetings were initially held in what is now the library and then later in the Evergreen Room.  Membership dues were set at $5.00 per year (still  unchanged).  Eileen Thomas became the acting president followed by Anthony “Bud” Ryan as the first elected president (he was president for seven years). 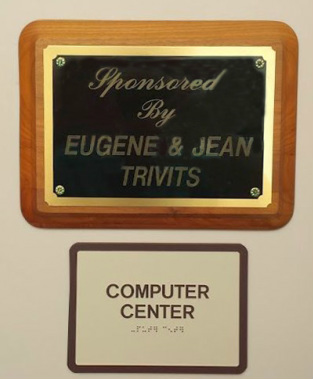 When the new Perry Education Wing was opened April 10, 2000, a new computer lab was established.  A donation from Eugene and Jean Trivits, Computer Club members, enabled the club to purchase additional computers for the new lab.  The pictured plaque resides outside the computer lab as recognition of their generous gift.

The club started with meetings once a month;  Jim Kniskern taught a class in the art room, 35 attended and there were only 10 computers. As interest grew, weekly meetings and then open lab sessions were established.

​Jim also came up with the club nickname "Senior Surfers".

honorary members
​designated by the board of directors

Jean Williams, Past Executive Director of the Newark Senior Center